Can You Use Mouthwash After A Tooth Implant?

Posted By All On Dental Implants

Many dentists usually recommend that patients avoid mouthwash for a particular period of time to allow for sufficient healing of post-surgical wounds. Alternatively, some dentists give special mouthwash for patients to use. However, using mouthwash containing alcohol can irritate the surgical site if used before the mouth has had a chance to fully heal. 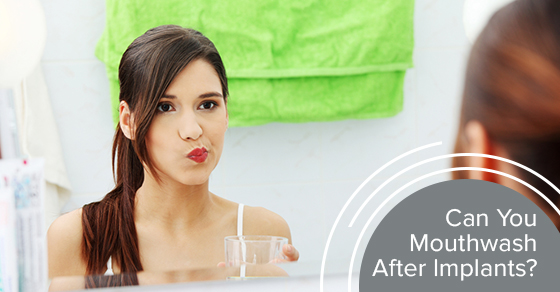 Once healed, there’s no need to avoid mouthwash as a part of your oral care routine. Mouthwash does not shorten the life of tooth implants in anyway, and the use of mouthwash is in fact part of a good practice of oral hygiene.

When you have a tooth implant, you should avoid spitting or rinsing in general, as this can impede the healing process. With regard to eating, you should limit your consumption to liquids and soft foods.

Immediately after surgery you should avoid using mouthwash, otherwise your dentist may give you as special mouthwash to use regularly. When using this gentle mouthwash, it is good to irrigate the implant area with care rather than vigorous swishing or spraying. You will destroy bacteria without irritating the gums around the implant.

Dentists also recommend using saltwater for a short period of time, but due to its acidic effect, it is not recommended for long-term use.

The Myth About its Link to Cancer

Mouthwash – particularly alcoholic mouthwash – has been rumored to be linked to the development of oral cancer. While the evidence in these studies is inconclusive, researchers did claim to find that those who use mouthwash more than three times a day were at higher risk of developing oral cancer than those who did not use as frequently or at all. Some researchers even claimed that people who wore implants and used mouthwash more than twice a day had an even higher risk of developing oral cancer.

However, these links went unproven and had little grounds to stand on. Mouthwash is a healthy part of your oral health routine, and it’s unlikely that a dentist would advise against using it based on the above claims.

Mouthwash should be avoided immediately after surgery, but there is no harm in using it over the long term. With regard to what specific kinds of mouthwash you can use, there are many brands available over the counter and it is best to choose one according to your personal preference or at the recommendation of your dentist.

Visit your dentist at least once or twice a year to identify any potential problems, and if you have any concerns with your implants, then speak with your dentist. They will be able to take any necessary action or precaution if necessary.


Warning: count(): Parameter must be an array or an object that implements Countable in /homepages/33/d606040452/htdocs/wp-content/plugins/techwyse-form/forms/template/form.php on line 165